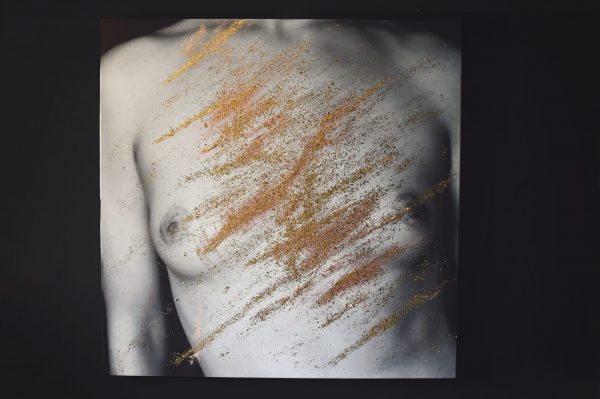 Pay over time with Art Money.

2019
This product is located at our Los Angeles gallery. Local delivery is available.

Trashy Girl is the second in the F*%k your Opinion series. She is a fine art black and white image, printed on canvas, and covered with newspaper and resin. All of the newspaper articles were hand selected, so she is quite a statement when hanging on the wall!

The F*%K your Opinion series was a response series I created after my first show. I had three separate gentlemen walk up to my work (black and white macro photography) and explain how I could do it better. The first, suggested I add glitter to my cigar fine art. The second ascertained that if I wanted to photograph cigars, which were trash, that I should photograph the newspaper, since it is all trash anyway. The third and final man explained to me clearly that my work was NOT art, and that the only way it would be considered art, would be if I put it on canvas, and covered it in teal paint.

When I came home from that show, I photographed a woman in her most vulnerable, and covered the images in glitter, newspaper, and teal paint, and called the series “F*%K your opinion.”

There are no inquiries yet.

With over 40 art fairs spanning more than 11 years, our shows in New York, Miami, Santa Fe, and San Diego are celebrated as premier destinations for discovering and collecting contemporary and modern art and design. Attracting nearly 100,000 attendees annually, Redwood Art Group fairs support galleries as they champion the careers of artists, strengthen the local art market, and inspire art lovers from around the world.

This website uses cookies to improve your experience while you navigate through the website. Out of these cookies, the cookies that are categorized as necessary are stored on your browser as they are essential for the working of basic functionalities of the website. We also use third-party cookies that help us analyze and understand how you use this website. These cookies will be stored in your browser only with your consent. You also have the option to opt-out of these cookies. But opting out of some of these cookies may have an effect on your browsing experience.
Necessary Always Enabled
Necessary cookies are absolutely essential for the website to function properly. This category only includes cookies that ensures basic functionalities and security features of the website. These cookies do not store any personal information.
Non-necessary
Any cookies that may not be particularly necessary for the website to function and is used specifically to collect user personal data via analytics, ads, other embedded contents are termed as non-necessary cookies. It is mandatory to procure user consent prior to running these cookies on your website.
SAVE & ACCEPT
X
Skip to content